Among other things, the current activities in VABENE++ include a study of micro aerial vehicles (MAVs; see Fig. 1) for potential applications in disaster relief and monitoring of large events.

Fig. 1: Image of a Quadrotos MAV as they are used at the Insititute of Communications and Navigation at DLR: the commercially available platform (this one by Ascending Technologies) is augmented with a Raspberry Pi, a WiFi-Dongle and a selection of sensors.

Especially when surveillance or rescue operations are to be performed at locations with absent or damaged infrastructure, MAVs prove to be a valuable tool: they can easily be transported to the required site, and due to their maneuverability and agility, MAVs allow for data acquisition from elevated positions. As an example, have a look at the two images provided in Fig. 2: Both of them depict the same damaged boiler tower. However, the blue, mostly undamaged boom from which the boiler is hanging can only be seen on the image obtained from an MAV. 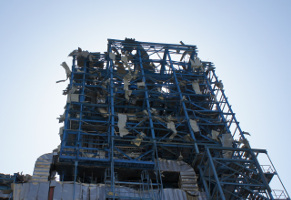 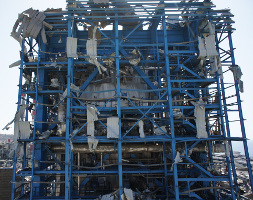 Fig. 2: Image of a boiler tower at the Vasilikos power plant in Cyprus after an incident in july 2011. Structural damage at the 15-story building can be seen from the ground.

From our previous experience we know that rescue teams have praised the use of MAVs highly, mainly for their short time to deployment, and the up-to-date surveillance information they can deliver. Yet despite these advantages, MAVs are typically constrained in two respects. First, the flight time of a single MAV is limited to only a few tens of minutes. Second, one human operator remains on the ground per MAV in the air. These safety pilots are key elements that translate the requirements of the mission team into corresponding steering commands. Concurrently, each pilot must take numerous external factors into account, including wind, obstacles, and battery status. These factors are the ones that often restrict the available operational information in terms of content and amount.

In order to increase the efficiency of MAV usage in such scenarios, the Institute of Communications and Navigation (IKN) actively investigates algorithms for deployment of autonomous swarms of MAVs. Thanks to the ubiquitous presence of GPS navigational signals in outdoor scenarios, almost any commercially available MAV can be programmed to follow a predefined set of GPS-based waypoints. By equipping the MAVs with sensors for collision avoidance and small computers, such as cost-efficient Raspberry Pis, the researchers at the institute design algorithms for coordination and guidance of multiple MAVs towards such waypoints, where the required measurements can then be automatically performed. This, on the one hand significantly simplifies the role of a pilot, as the MAVs automatically navigate towards the specified coordinates and avoid collisions. On the other hand, this also increases the coverage area due to the use of multiple MAVs.

In this year these concepts were first experimentally validated in a simplified environment. A swarm of MAV has been programed to cooperatively explore a field of predefined waypoints while avoiding collisions with the ground as well as with each other. The new algorithm is realized on on-board Raspberry Pi computers. It is a decentralized scheme that iteratively computes a next waypoint from a predefined set of possibilities for each MAV in a swarm, while guaranteeing a collision-free trajectory at a predefined height over the ground. The automatic generation of waypoints represents another research area of the institute. Here the goal is to develop intelligent algorithms that are able to automatically generate the waypoints so as to either take measurement samples at most informative locations, or to cover the exploration area most efficiently.
At the IKN we are in the favourable situation to have a laboratory where we can test our algorithms. In there, we can use a system of cameras to track objects, including our MAVs. The experiments in that laboratory can thus be flown comparatively accurate and independent from the outside weather. An Experimental flight from this summer with two MAVs is shown in Figs. 3 and 4:

Fig. 3: Animation of recorded exploration paths in a laboratory environment of 9x5 cells with 1m/0.7m spacing that are to be measured. The flight paths of the two MAVs are shown in orange and blue.

Fig. 4: Recorded exploration paths in a laboratory environment of 9x5 cells with 1m/0.7m spacing that are to be measured. The flight paths of the two MAVs are shown in orange and blue.

Experiments that have been successful indoors are then carried outdoors. These real-world scenarios offer the possibility to test the algorithms on significantly larger scales. However, we do also have to live with the lower positioning accuracy provided by GPS (see Figs. 5 and 6).

Fig. 5: Animation of the recorded exploration path in a testing environment of 5x5 cells with 3.5m spacing that are to be measured. The flight path of the two MAVs is in orange/violet, the goal positions are connected by blue/yellow lines in the order of their visitation.

Fig. 6: Recorded exploration path in a testing environment of 5x5 cells with 3.5m spacing that are to be measured. The flight path of the two MAVs is in orange/violet, the goal positions were connected by blue/yellow lines in the order of their visitation.

Even though a safety pilot is still present for each MAV in all these experiments, their responsibilities were significantly simpler. Due to a relatively high level of autonomy, it was no longer necessary for a pilot to steer the MAV, but rather monitor the measurement process. Surprisingly, this represents a new challenge for the algorithms and humans: a safety pilot should understand the logic behind the exploration algorithm in order to be able to act confidently in case of unforeseen circumstances. In most simple cases this can be achieved by an MAV communicating to a pilot (or directly indicating by appropriate rotation) the following flight direction, which should help a pilot to anticipate possible difficulties or crashes. With more complex exploration algorithms, more complex human-machine interfaces will be necessary, though.

The first test flights of the newly developed system have been conducted this year and will be continued throughout the winter in our laboratory. Our goal is to implement collision avoidance in all directions such that we can explore complex outdoor scenarios without worrying about collisions. Based on that, we want to look at different exploration methods for different tasks. Our goal in the scope of VABENE is a ready-to-use system in 2017.

The goal is to efficiently manage the required rescue logistics and the nearby traffic flow even under extreme conditions, thereby enabling response teams to rapidly reach the locations where they are needed. Research focuses on such areas as simulation and large-scale traffic... END_OF_DOCUMENT_TOKEN_TO_BE_REPLACED